Clinical implications of the third universal definition of myocardial infarction

The Universal Definition of Myocardial Infarction has emphasized the use of biomarkers as an integral part of the diagnosis of acute myocardial infarction (AMI) since its first iteration in 2000 (1).  The criteria have been that to diagnose myocardial infarction, one must have elevated values of biomarkers of cardiac injury in the appropriate clinical setting.  Thus, the use of biomarkers and how they should be used is integral to the proper use of these criteria.  Specific issues included in the guidelines that should be appreciated from this reliance include:

Myocardial injury can occur for many diverse reasons.  Apoptosis as well as necrosis can lead to the release of troponin and some would include still more potential mechanisms for release.  It may even be the case that reversible cardiomyocyte injury can lead to release (2).  Regardless of the specific mechanism, the concept of an elevated troponin value in the appropriate setting leading to the diagnosis of AMI is nonetheless strongly endorsed.  However, if the elevation is due to some other etiology, such as, myocarditis, heart failure, arrhythmias, uneventful percutaneous or surgical procedures, the term myocardial injury is preferred (3).  It is recognized that the distinction may be difficult at times (see clinical sections).

Troponins are the preferred biomarkers and have been since 2000 not only overall but for each individual subcategory of diagnosis.  This is because they are more specific and substantially more sensitive than CK-MB assays which was used previously.  It is unclear whether there is any situation in which CK-MB is helpful (4).  CKMB measurements should only be used if troponin measurements are not available.  If CK-MB is used, the mass assay is strongly preferred and gender specific cutoff values should be utilized.

In the 2000 document, the 99th percentile of a normal reference population was mandated for use as the decision limit for MI and the most recent iteration confirms that advocacy (1,3).  This is referred to as the 99th percentile of the upper reference limit (URL).  The exact value to use varies from assay to assay but the choice of the 99 percentile was related to the fact that this limit is roughly three standard deviations from the mean value.   It was thought that such an approach would protect against false-positive elevations (5).  However, it has turned out that this was not as major a concern as initially thought because the values for most conventional assays with the exception today of high sensitivity assays are nowhere near the normal range.  It has become clear from a large variety of reports that the use of this cut off value maximizes the identification of patients with AMI and proves to be a better indicator of  prognosis (6,7).  The values for the 99th percentile vary assay to assay but can be found in a variety of sources and in the tables below (8).

It is acknowledged that all assays have imprecision due to both preanalytic, and analytic issues.  It was initially thought that increased imprecision might lead to false-positive values.  This is not true.  It simply makes assays less sensitive (9).  However, defining a rising pattern is related to the precision around any given value and thus such an evaluation is facilitated by better precision.  That does not imply that assays that do not reach the level of 10% imprecision at the 99th percentile are unusable.  Nor has it ever been advocated in the guidelines that values above the 99th percentile URL should be used based on precision measurements (5).

Values should be presented in whole numbers either nanograms per liter (ng/L) or picograms per milliliter (pg/ml).  This is due to the fact that asthe assays have become more sensitive, the numbers of zeros has increased and this could lead to an inadvertent error either in the reporting and/or the interpretation.  Accordingly, most the guidelines including the Universal Definition (3) suggest that whole numbers be utilized.

Measurement of troponin should be assessed at time zero and repeated three to six hours later.  If there is a high index of suspicion even later sampling may be necessary.

The value of serial sampling.

Serial values allow for the demonstration of a rising and/or falling pattern which is essential to distinguish acutely increased values from chronic elevations that may be associated with structural heart disease.  The presence of such a rising pattern, however only defines that a given elevation is of an acute etiology.  It is the association of those elevations with the clinical determinants (see clinical write up) that is required for the diagnosis of AMI.  Patients who have elevated troponin values in the absence of AMI nonetheless are at substantial risk for mortality over time (10).  Therefore, a follow-up of all patients who have elevated troponin values is suggested.

Persistence of elevations and reinfarction.

Since values of troponin may remain elevated for two weeks, there was initially some concern that there may be difficulty diagnosing reinfarction.  That is not the case and the data suggests that reinfarction can be detected if there is a 20% increase in values (11).

Differences in troponin values with types of MI.

It is thought perhaps that values of troponin may be less with type 2 than with type 1 MIs. This is far from proven but the distinction to be made is important since it is likely (see clinical write up) that these types require different treatments to achieve optimal clinical benefit.

If cardiac troponin values are elevated but the clinical setting is not one of acute ischemia, it should not lead to a diagnosis of myocardial infarction.  However, this distinction may be difficult at times.  For example, a patient with heart failure may have a rising pattern of troponin values that could be due to AMI either type 1 if the underlying etiology for the heart failure is coronary artery disease or to type 2 if there is substantial supply-demand imbalance related to the presentation.  On the other hand, elevations of troponin can occur due to acute ventricular stretch alone.  In addition, elevated levels of troponin  are common in the heart failure population even in the absence of an acute presentation and those elevations should not in and of themselves lead to adiagnosis of AMI. 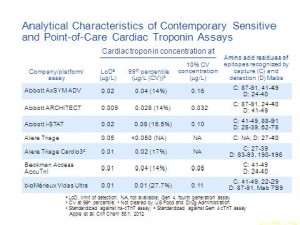 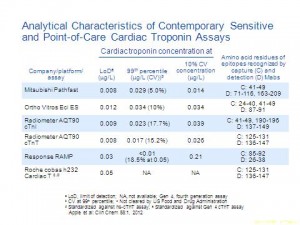 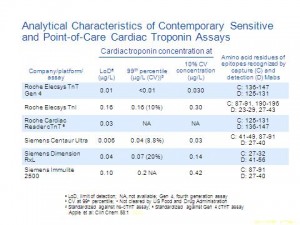 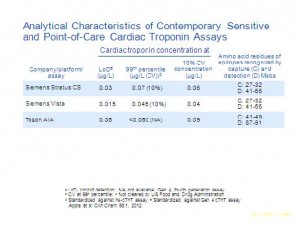 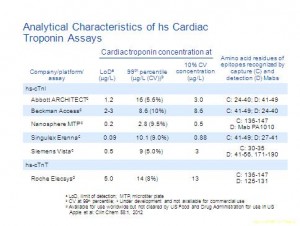